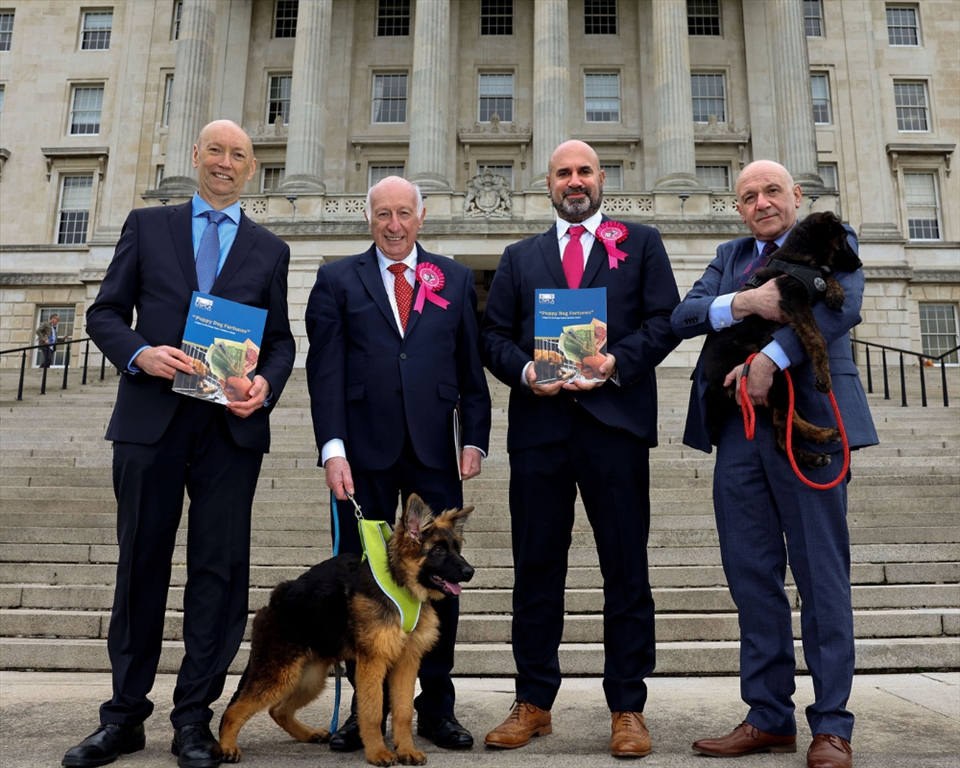 A report launched by the USPCA, has detailed the shocking scale and ruthless nature of the region’s puppy industry, which has been feeding the demand for pups not only on a local level, but also in Great Britain.

Officially launched at a Stormont event on Wednesday [20th October], the report entitled ‘Puppy Dog Fortunes’ provides an insight into the operations of legal breeders, illegal breeders, transporters, and third-party sellers, all of whom are desperate to cash in on the multi-million-pound industry at the expense of defenceless companion animals.

The report calls for enhanced regulation and better enforcement action to address the serious issues and loopholes currently being exploited by individuals involved in the trade. In the last two years alone, the industry’s scale has rocketed, with the report citing Covid-19 as ‘fanning the flames’ on the demand for pups, with average prices reaching £2,000 each.

Commenting on the report, Brendan Mullan, USPCA Chief Executive, said, “We have a very grave issue at hand which is causing unthinkable suffering to the thousands of dogs who are only seen as commodities by those engaged in this cruel trade, both legally and illegally. NI has at least 45 licensed breeding establishments – one of which we are aware has nearly 700 breeding bitches and apparently only 10 members of staff. This staffing ratio causes great concern for the welfare of the animals involved.

Brendan continued, “The illegal side of the puppy trade in Northern Ireland represents a sophisticated, inter-connected web of criminal activity. There is significant need for targeted and focused enforcement in respect of all groups and individuals involved – the illegal breeders, transporters and dealers.”

Intelligence gathered by the USPCA indicates the profitability of the industry. Based on the movements of a single ‘licensed’ pet transporter, who is estimated to be illegally transporting 120 pups a week, this represents a prospective value of £11.7million over the period of a year.

“This is a cruel money-making industry that demonstrates no regard for the welfare of animals. This report aims to shine a much-needed light on the issue, as the first step in tackling it involves recognition of the scale and seriousness of the problem. We fear that this industry is teetering dangerously on the edge of being uncontrollable in the absence of more effective regulation and enforcement,” Brendan added.

John Blair, MLA and Chair of the All Party Group on Animal welfare, stated, “Northern Ireland is lagging behind the other jurisdictions on these islands in terms of crucial animal welfare legislation and there is an urgent need to crack down on illegal puppy farms. I welcome the USPCA's report, Puppy Dog Fortunes, on illegal puppy trade. The report provides vital insight into the operations of illegal breeders and is a positive step towards tackling puppy farming and other animal abuses.”

Speaking at the launch event, MLA Robin Newton outlined his work in bringing forward a Private Members Bill to address many of the issues including the introduction of Lucy’s Law in Northern Ireland which would make it illegal to sell puppies and kittens under six months old through third party sellers such as a pet shops or commercial dealers.

Robin commented, “Animal cruelty is a matter of huge concern to the Northern Ireland public. The welfare of dogs and pups is a particular worry and reports of illegal puppy farming horrifies the public. I’m pleased to be working on a Private Members’ Bill, Lucy’s Law for Northern Ireland, to address the matters.”

Dr Marc Abraham OBE, media vet, campaigner, and founder of the hugely successful Lucy’s Law campaign says, “Tackling both the illegal and legal puppy trade starts with making all dog breeders accountable. By banning commercial third-party puppy dealers, legislation known as Lucy’s Law, we ensure the only options available to prospective dog owners are to buy direct from the breeder - and always see the puppy interacting with mum in the place they were born - or consider visiting a reputable rescue shelter instead. Lucy’s Law is already enforceable in England, Scotland, and Wales; so on behalf of concerned dog-lovers everywhere, I hope Northern Ireland now also adopts Lucy's Law, which would make every single UK dog breeder accountable. This would be the first major step in ending the cruel, exploitative, and abhorrent puppy trade.”